First Tekken Tag Tournament 2 match videos from this year’s AOU are already available! Be sure to check this post frequently because it’s going to be updated as new videos pop up!

END_OF_DOCUMENT_TOKEN_TO_BE_REPLACED

Harada-san just tweeted the new trailer for TTT2! Live from AOU! Check it out! What do you think?

Aris has put up his latest podcast. Along with MYK he talks about the recent MLG decision. Besides, he interviews Slips and Shin, asking them about the old Tag days and comparing TTT community to the current one. Click the link below and enjoy the show!

If you want to help Aris keep on upgrading his site, DONATE to AvoidingThePuddle.com.

Katushiro Harada has teased pics of the TEKKEN TAG TOURNAMENT 2 Arcade Machine that will be shown at this coming weekend’s AOU SHOW 2011.  See below for all the pics and be sure to follow his twitter for all the latest updates!

The Famitsu website has a new article highlighting TEKKEN TAG TOURNAMENT 2 with some information covering the recent magazine article. In the snippet you can see a whole slew of new character CGs and screen shots. A quick look at the screens shows the revival of the Mishima Polytechnic stage (Tekken 3, TTT) and the return of multiple levels. Click the link below for all the goods!

According to Versus City, the latest issue of Famitsu magazine covers new Tekken Tag Tournament 2 stuff. Apart from the portraits of Kazuya, Bob, Xiayou and Zafina it gives new hints on the gameplay.

Item moves are back and this time there are going to be more variations for each item. Rage mode is back as well, however, the formula has been changed – this time your tag partner character will be able to get in the rage mode, however, the requirements that ought to be met will depend on the character, meaning that this will be probably one of the factors people will consider while developing tier lists. Last but not least, new wall options will be possible. What do you think about breaking a wall and making your partner character continue performing a combo? Sounds cool and guest what – it will be possible!

Given the information above we hope that scans from Famitsu will be posted very soon!

Our friends at Avoiding The Puddle relayed some awesome news about new TEKKEN TAG TOURNAMENT 2 screens from Harada-san! The big boss himself has been posting some new screens from the latest Arcadia Magazine issue. Check them out by clicking below!

We’re finally presenting you the very first SDTEKKEN Talks International interview. Our guest is the American community representative, Rip! Click the link below to jump to the interview.

END_OF_DOCUMENT_TOKEN_TO_BE_REPLACED

Thanks to Oichi at VersusCity for the heads up! The latest issue of Arcadia Magazine reveals the preliminary games confirmed for Tougeki (Super Battle Opera) later this year! Tekken Tag Tournament 2 is one of these games! Check VersusCity for the full report!

Famitsu.com has put up a lot of new TTT2 screenshots! Jump to the article linked below to check out images of Jin, Heihachi, Jinpachi, Jaycee, Miguel, Asuka, Law and Yoshimitsu!

According to our friends at inatekken, the newest issue of Famitsu Magazine has a short feature on Tekken Tag Tournament 2 where they unveil a new character dubbed as “Jaycee” ! EDIT 12:42 AM – It is confirmed that “?” from the Christmas trailer is indeed “Jaycee” ! Thanks to The Lone Gamer’s tip, here are some pics of the article!

Our friend aris at Avoiding The Puddle rings in the new year with an EPIC podcast! Joining aris on this epic show is none other that TEKKEN series director Katsuhiro Harada, game designer Michael Murray, and Soulcalibur director Daishi Odashima! Click below for all the juicy details on TEKKEN TAG TOURNAMENT 2 and more!

4GAMER has a new article up that shows off some 720p screens of TEKKEN TAG TOURNAMENT 2! The screens are grabs from the CG portions of the newest trailer. Speaking of trailers, 4GAMER also has the full 720p, 60 FPS version up for download on their site! Enjoy! 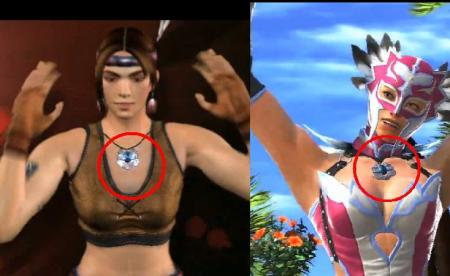 The detectives on the internet are on the prowl with the latest TEKKEN TAG TOURNAMENT 2 trailer revealing a yet unnamed character dubbed as “?” ! Take a look at the above image. “?” is wearing a very similar amulet that series mainstay Julia Chang wears. Also worth mentioning a lot of Julia’s throws are wrestling based and BOTH characters have feathers on their head! Coincidence? You decide. TTT 2 is slated for a Summer 2011 release in Japanese arcades.

Leader of the TEKKEN PROJECT team, Katsuhiro Harada, revealed on his twitter just now the latest footage from TEKKEN TAG TOURNAMENT 2! Happy Holidays and enjoy! Could this just be a taste of what Namco has in store for us in 2011? Stay tuned, more goodies may be on the way?

“Looking and waiting for something special? Make sure to continue following and tell your friends to stay tuned ….”

What could this mean? Updates on the upcoming TEKKEN PROJECT title, Tekken Tag Tournament 2 (Spring 2011 for Japanese Arcades) have been scarce since MLG’s Grand Final event in Dallas… Or could we possibly be getting more news on TEKKEN X Street Fighter? Or maybe something with a little more… Soul? Whatever it may be, Namco Bandai definitely (from our inside ninja sources) has something in the works. It’d be wise to follow FilthieRich and Harada-san on twitter for the latest info in the coming weeks!

Avoiding The Puddle is not the name of Aris’ Tekken podcast anymore. He has just established AvoidingThePuddle.com, a new website dedicated to fighting games, run by Aris, MYK and tieTYT. Don’t waste your time, bookmark the website now!

Law And Paul Taking Kazuya To A Bank

“What’s wrong with the title?”, you may ask. Well, take a look at the rest of the entry to check a screen of a new TTT2 Law/Paul tag throw performed on Kazuya and posted by Katsuhiro Harada.

END_OF_DOCUMENT_TOKEN_TO_BE_REPLACED

Right before this weekend’s NSUT XII in Paris we’re publishing an interview with one of the biggest Tekken legends, Ryan ‘Prodigal Son’ Hart! The Kayuza player has answered the questions you submitted before WCG 2010 finals. Click the link below to jump to the interview.